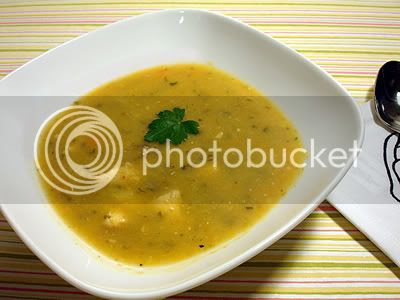 On some days the weather around here gets so depressing (that coupled with depressing political, economic and personal happenings), that I just want to say sod it, curl up into a ball and not move for a few hours. I don't know about you, but I sometimes wish that the Willy Wonka Magic Food Bubblegum with a 3-course meal variety is real. Either that or a food drip.

A few weeks ago I found a bag of overpriced wild rice at Trader Joes. On the days I have canned soup for lunch, I spend almost 10 minutes trying to figure out what the floating bits and pieces are. Sometimes they appear to be dehydrated chunks of chicken but I can never really tell. Just the other day, I opened a can of Progresso's chicken and wild rice to find mushed up carrots bobbing about with some little black specks. It took me quite a few minutes to realize that those specks were wild rice.

I figured if I could spend $2 on a can of sodium-infused carrot mulch, I could haul my lazy ass up to make a healthier version on soup that won't cause hair loss or severe dehydration half a year from now.

A lot of wild rice recipes online seem to have an insane amount of cream or half and half which I somehow find to be quite unhealthy. That coupled with the fact that my partner can't have dairy makes creamy soup recipes often undesirable. After a prolonged, time consuming, hair-tearing search, I found this really interesting recipe on Kitchen Parade that it uses vegetables to create a creamy base (red creamer potatoes create a starchy texture). 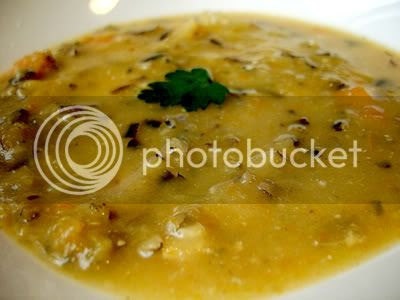 I wanted some protein in the soup so I added some pan-seared chicken marinaded in some Stubbs chicken marinade. I changed the recipe very slightly from the original, but all in all I think it stayed true to the Kitchen Parade vision of a healthy, vegetarian soup. We rounded off dinner with crusty bread and a really great bottle of Mirassou (one of the oldest wineries in Western US) 2007 Chardonnay. 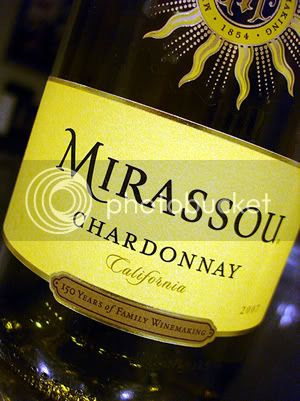 Cook the wild rice in water according to package directions.

In a separate skillet, pan-sear the chicken meat until just cooked through.

In a dutch oven or soup pot, saute onions, garlic, leek, celery and carrot in the butter and olive oil until the onions become translucent, about 10 minutes.

Add in the chicken broth and potatoes, bay leaves, thyme and parsley. Bring the soup to a boil, cover and simmer for about 20 minutes until the potatoes are soft.

Turn the heat off. With an immersion blender puree the soup until smooth, with some chunks left. Add in the chicken and wild rice. Season with salt and pepper. Stir to combine.
Posted by Amanda at 8:37 PM

That soup looks good. I have been looking for more ways to enjoy wild rice and in a soup sound great.

This looks divine. Leek is another veg that I find lends an incredible creaminess to soup.

right up my alley this is! such a comforting looking soup.