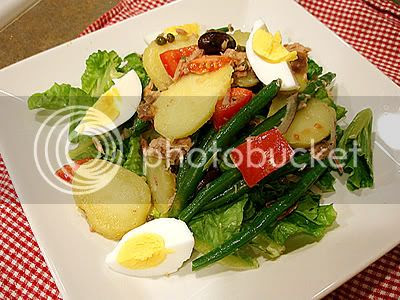 Hello! I hope your Thanksgiving was as enjoyable as mine. We had an 18lb. turkey which we ate for three straight meals and a gigantic bowl of the best mashed potatoes I've ever had that does not involve dairy. Hurrah! Heading back from Portland to Seattle, I swear my seat belt buckle was almost breaking under my gargantuan mashed potato, pumpkin pie, turkey stuffed self.

While in Portland, I manage to score a copy of Williams-Sonoma's "Savoring Provence" from Borders for almost 75% off. I love French food, and I think it's my New Year's resolution to try every single thing from that book, including frog legs, rabbit saddles and baby fish. 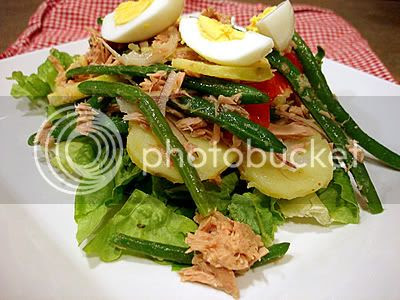 My first choice from the book is the Niçoise salad which basically just translates to a salad from Nice. As always, Niçoise salads MUST have green beans, romaine lettuce, tomatoes, eggs, anchovies and olives. The recipe called for artichoke hearts but I skipped it because we don't live in an artichoke friendly household.

Bring a pot of salted water to a boil. Cook potatoes until tender, about 10 - 15 minutes. Drain, and set under running water until cool. Cut into 1/4 inch thick slices.

Blanch the green beans in a pot of salted water for 2-3 minutes. Drain, and set under running water until cool.

Line a large salad bowl with lettuce leaves. Lightly toss the remaining ingredients except for the eggs in a separate bowl with the vinaigrette. Spoon over the lettuce and arrange the quartered hard-boiled eggs on top.
Posted by Amanda at 7:53 PM

I think the salad Nicoise is one of the most beautiful salads. I recently made one too for a fall picnic.

I like the idea of slicing the potatoes instead of cubing them. It's a more elegant look.

"an artichoke friendly household"?? ...the heck are you talking about? i'm deeply offended.

Weekends to peopleig2tmean that they can have a two-day wowgold4europe good rest. For example， people gameusdcan go out to enjoy themselves or get meinwowgoldtogether with relatives and friends to talk with each storeingameother or watch interesting video tapes with the speebiewhole family.
Everyone spends agamegoldweekends in his ownmmoflyway. Within two days,some people can relax themselves by listening to music， reading novels，or watchingogeworld films. Others perhaps are more active by playing basketball，wimming ormmorpgvipdancing. Different people have different gamesavorrelaxations.
I often spend weekends withoggsalemy family or my friends. Sometimes my parents take me on a visit to their old friends. Sometimesgamersell I go to the library to study or borrow some books tommovirtexgain much knowledge. I also go to see various exhibition to broadenrpg tradermy vision. An excursion to seashore or mountain resorts is my favorite way of spending weekends. Weekends are always enjoyable for me.