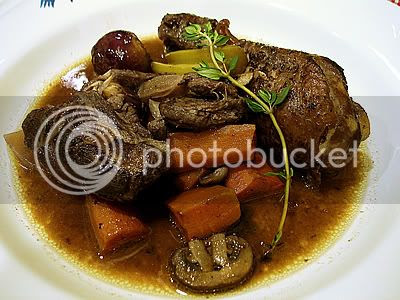 Ever since I received a dutch (French, pardon) oven for Christmas, I've been wanting to make as many stews as I can, just so it gives me an excuse to use my beloved Staub. It is after all called a cocotte and what else better to make in it than a traditional French dish. 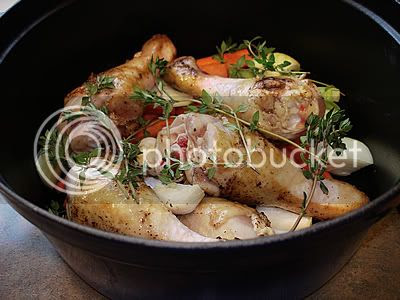 I was hunting high and low just the other day for a bottle of burgundy. Alton Brown suggests a good bottle of pinot noir while Nigel Slater says a beaujolais will do just fine. Seeing as this is my first time making coq au vin, I wanted to keep the cost below $20 for the whole meal. That meant putting aside the $25 of Willamette Valley 2006 Pinot Noir and using a relatively cheapo bottle of wine. 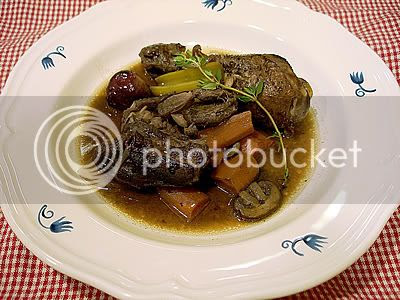 "Blasphemous!", the gourmet cook pooh-poohs. Well, guess what you rotten snooty connoiseur of fine foods. I went out and got THE CHEAPEST JUG of burgundy you will ever find in this lifetime. I settled for a bottle of Carlo Rossi Burgundy that is made from an undefined grape varietal and was aged in Tupperware cases down in Grandma Rossi's basement. The chicken I think, turned out surprisingly marvelous. I would however, not recommend drinking the wine. You would probably want to just feed it to the drain pipes and pull out that bottle of expensive pinot. You know what they say about "never cook with wine you won't drink?", well PISH TO THAT.

By the way, I've modified the recipe to suit regular tender, free range chicken bought in the comfort of your pretentious co-op. Unless you have a shotgun in hand and a taste for wild fowl, it won't take you hours to make this recipe.

Cut off the ends of the pearl onions. Bring a saucepan of water to boil and add in the onions. Boil the onions for one minute and remove from the water. Leave to cool. When the onions have cooled, peel off the outer skin and set aside.

Season the chicken with a little salt and pepper and set aside.

In a large saute pan, add one tablespoon of water and the bacon. Fry the bacon until all the water has evaporated and the bacon is golden in colour, about 10 minutes. Using a slotted spoon, remove the bacon, leaving the lard in the pan.

In the same saute pan, fry the mushrooms for about 8 minutes until the mushrooms are browned and the juices are evaporated. Set the mushroom aside with the onions and bacon.

After braising, remove the chicken, vegetables and all the herbs from the stock in the dutch oven and set aside. Discard the herbs.

Turn heat off and serve with bread, egg noodles or potatoes and a side of salad with balsamic vinaigrette.

*Note: Alton Brown marinades the chicken in the wine stock overnight. This works if you're using a really old bird or rooster and the meat needs to be braised for a long time. I find that a waste of time if you're using regular chicken; it makes the wine flavour overwhelming and the chicken meat too soft. Braising or over and hour would suffice to infuse the chicken with a subtle wine flavouring and leave the chicken on the bone.
*Note: Because the bacon is already slightly salty, watch it when seasoning with salt.

Ooo! I have seen at least one iteration of this recipe in the last few days, but was just not sure if it was worth it to me. But I really trust your recipes, so I think I'm gonna make a go of it.

Cheap wine? As in 2 buck Chuck? :) It's all the same once it boils down anyways!

aleta meadowlark: Alton Brown suggests marinading it overnight for the wine to soak in, I don't think it's necessary -- my way is much quicker but still a lot of work. You should try it though and let me know what you think!

duo_dishes: I actually think none of the 2 buck chuck red wines will work with this, because they're too dry. The Carlo Rossi stuff is amazing, it's $5 for a whole gallon. Whee!

Looks lovely. It's been far too long since I've had a good coq au vin.

I've made many a coq with cheap wine---always works. But, honestly, if you can get yourself a stewing hen and a $10-20 bottle of French burgundy... hard to go back.

i don't know if it's because we're students or we just generally go by the cook with wine you won't drink and save the real stuff for just drinking mentality, but it works! :) this looks soooo wonderful. i bet it tastes amazing, despite the cheap wine ;)

Made this tonight and it was really really REALLY good. I used your wine selection and it was perfect. To save some $$ I went ahead and used the full cut-up chicken that I already had. It took a bit longer than I planned, and I didn't have enough bacon so I substituted pancetta (yum). I am also mid-kitchen remodel and couldn't find my dutch oven or even my super deep skillet. As a result, I had a lot of grease splatter to clean up (yuck), and turning large pieces of chicken is unwieldy, and timing differently sized pieces meant cooking the breasts longer. STILL, it was killer. My husband is raving. This is a keeper .. just next time I will wait until my kitchen is unpacked and will start it a bit earlier in the day (laugh). Thanks for sharing a lovely recipe. Another big winner.