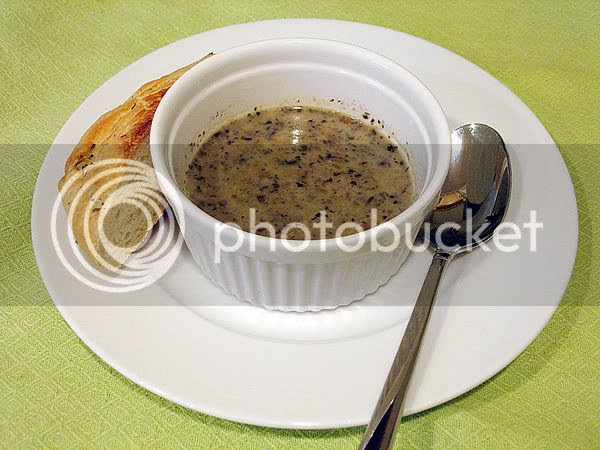 For a couple of weeks now I've been eyeing some mushroom soup recipes. I love mushrooms so much I can probably have them everyday. One of my favourite mushroomy meals of all time is spinach and mushroom frittata which goes wonderfully with a cup of coffee on Saturday mornings.

I bought some fresh foccacia at the grocery store today and immediately wanted to head home, have some soup and bread, a glass of wine and work on my defense. In that vein, the soup had to be easy, quick and filling too. So in came the mushroom soup idea. There are tons of really great recipes out there, so I just fused a few and made my own using the herbs I know best. It turned out that the soup was really light - I used a teensy bit of corn flour and skim milk instead of heavy cream to make the soup thick and I think being able to chew on mushroom bits and biting into a piece of foccacia layered with cream cheese whilst sipping a glass of Chardonnay helped with bringing out the wonderful flavour of this soup. You can make the recipe vegan by using soy milk instead of skim milk.

Turn heat off and stir in 1/4 cup milk. In a small bowl, mix together corn flour and remaining milk and stir into soup. I find that using a food processor helps to pulse the mushrooms better than an immersion blender, but you can use either one.

You can serve with some grated Parmigiano or just plain.
Posted by Amanda at 8:34 PM

That mushroom soup looks nice and thick and creamy and good!