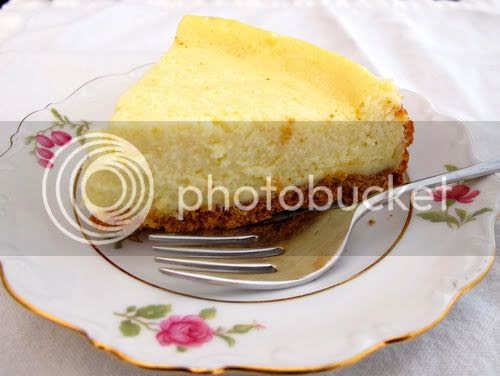 While the boyfriend is away over this Labor's Day weekend, I've decided that I am going to subsist on things that I don't usually have when he's around. This means all things dairy and deep fat fried. Yes, the boyfriend will come home to a more rotund, less appealing girlfriend.

That being said, I thought I'd kick off the solo weekend with some cheesecake and tea. How girly! However, I'm not a huge cheesecake fan. They come across as cloying, rich and sometimes bordering on nauseating. A slice of the Oreo crumbled one at The Cheesecake Factory is enough to send me into convulsions and regret for a month. On the two separate attempts I have tried at making my own low-fat cheesecake, I have failed miserably. One was a no-bake attempt that fell apart as soon as I removed it from the freezer. The other was a sugared-up hunk of cream cheese studded with graham cracker bits.

When I received the Harumi's Japanese Home Cooking

This recipe by Harumi Kurihara is really simple and as someone who REALLY HATES BAKING CAKE, it was fantastically easy to whip up. As long as your ingredients are at room temperature, you can make this in less than 15 minutes (not including baking time). Her recipe called for a 7-inch springform pan, I had an 8-inch. I improvised by making a quarter extra of the batter and crumbs. The cake turned out really great and I can safely recommend that if you're looking for an easy-peasy dessert, this is it.

1. Make sure butter and cream cheese are at room temperature. Line the a 7-inch springform pan with parchment paper.
2. Soften the butter and mix with the graham cracker crumbs.
3. Pour the graham cracker mix into the bottom of the prepared pan and press down lightly to make a base. Preheat the oven to 340°F.
4. In a bowl, beat the cream cheese with an electric mixer until soft, then add the rest of the ingredients, in order, mixing each one thoroughly before adding the next.
5. Continue until the mixture thickens (about an extra 5 minutes after adding the lemon juice), then pour into the pan on top of the graham cracker crust. Bake in the oven for 45 - 50 minutes until the top is golden brown. Remove from oven and set aside to cool.
6. Once it had cooled, remove from the pan, discard the lining paper and leave on a rack to cool completely.

Konosur's Notes:
(a)You can refrigerate the cake for up to 3 days in a cover container. It will become thicker and richer.
(b) I baked for about 55 minutes but the top did not turn golden. However, the top jiggle only slightly when I removed it from the oven - a sign that the cake is done. I think I will use the convection setting next time.