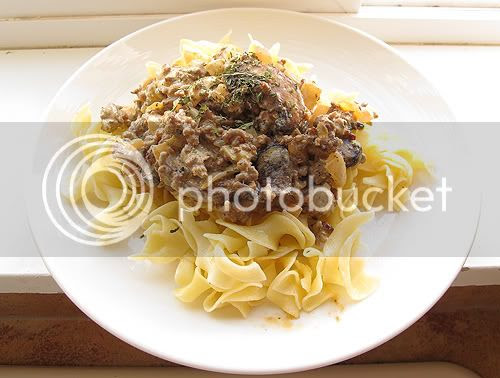 There are a few things in my kitchen that I am willing to spend an obscene amount of money on: cheese, bread, milk and anchovies. I love cheese to death. Give me a wedge of Stilton, some good French bread and wine and I'll call it a good meal. Unfortunately, during those rare times I decide that goat cheese and crusty baguette would suffice for dinner, the boyfriend would have to resort to ramen. I sometimes can't help but feel so terribly sorry that he would never be able to have cheesecake or creme brulee or all the wonderful food that cream and cheese creates. I do try however, to hunt down dairy-free alternatives that would work just as well as the real thing - Earth Balance shortening for chocolate chip cookies, garlic sauce instead of tzatziki, Rice Dream in mashed potatoes and soy yogurt in potato salads.

We recently discovered a dairy-free alternative to cheese and sour cream at Whole Foods. I can vouch that the sour cream by Vegan Gourmet taste almost like regular sour cream, with a slight soy flavor that mellows out when added to dishes. In fact, I think their sour cream is so much like the real thing that I've started using it in fajitas and tacos. So for the first time in his adult life, the boyfriend is finally able to try beef stroganoff - not just browned beef and egg noodles, but the whole creamy deal. It's rare times like that I think technology and chemicals have made life that much easier for a handful of people.

This is the recipe I use for beef stroganoff - you can substitute beef slices for ground beef and I've also listed the regular, dairy versions that can be used.

Cook the egg noodles according to directions. Drain the cooked noodles, return to pot and toss with a tablespoon of butter. Cover to keep warm.

Heat 1 tbsp butter in a large skillet, add the ground beef. Use a wooden spatula to break up the chunks and sprinkle with a little salt and ground pepper, paprika and Worchestershire sauce. Allow the beef to brown without stirring - about 6 minutes. Flip over, sprinkle again with salt and ground pepper. When all the beef has been browned, remove with a slotted spoon and set aside in a bowl.

To your pan, add the remaining butter and toss in the onion and mushroom. Sprinkle lightly with salt and allow the onions and mushrooms to brown. Remember not to stir as stirring prevents browning. Once the onions and mushrooms have been browned, add in the marsala wine to deglaze the pan, scrapping the browned bits and pieces from the bottom of the pan. Turn up the heat and allow the wine to reduce by half and then turn the heat down to the lowest setting.

Add in the beef, sour cream and milk. Stir gently until the sour cream has melted and a rich thick sauce is created. DO NOT BOIL! Season with salt and pepper. Serve over egg noodles and sprinkle generously with the chopped parsley.