A lemon and lavender cake for Mother's Day 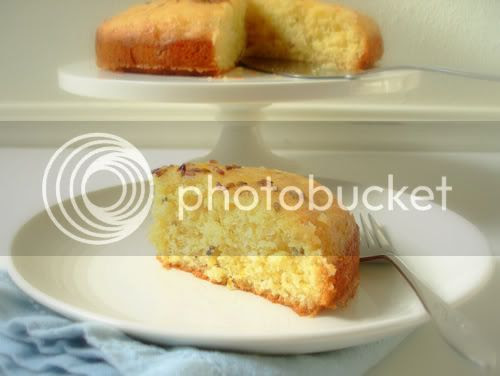 Not too long ago, I was seized by some unbearable need to purchase a bag of 20 baby lemons at Whole Foods. I don't know if it was being in Whole Foods that made me feel I needed to spend money, or if was the fact that lemons somehow scream summer and that in the middle of May, Seattle is 46 degrees and raining. Lemons have an uncanny ability to look attractive in any spot they sit in - in a bowl, in a pasta dish, in a roast chicken or in a cake.

But back to the lemons, I call them baby lemons but in my uneducated citrus-food guess I think they're just dwarf-sized lemons. However, they came unwaxed and bright-yellow for the affordable(!) price of $4.99. I had stumbled on a recipe at formerchef.com for a lemon and lavender cake that I wanted to try really badly and a monstrous bag of lemons seemed like the perfect excuse. 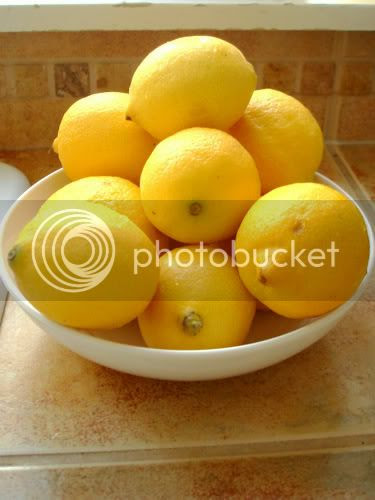 Back home, I also figured out a way to trick Brian into allowing me to have the cake. My first trick was to turn the cake into a non-dairy one by using rice milk instead of the regular dairy version (Aha! I have him trapped, we're both gluttons now). And the second trick was to use this as Mother's Day prototype to dedicate to both our mothers who are stuck in their morbid jobs far away from us. Also, I think I deserve to celebrate mother's day since I believe I have done a pretty decent job "mothering" my very rascally dog for the past two years. 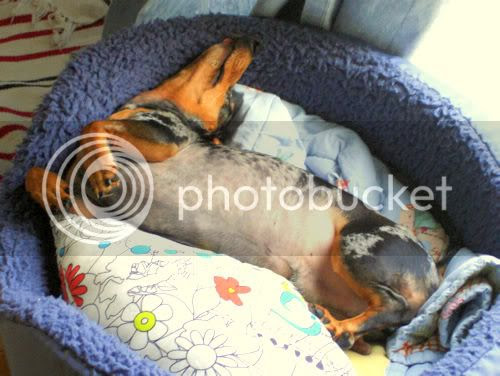 So, here's my take on the lemon and lavender cake by Kristina at formerchef.com. It should serve well at a Mother's Day brunch with some nice finger sandwiches, tea and strawberries with lots of cream! I used light olive oil instead of vegetable oil, unwaxed lemons and organic lavender flowers; suggestions for swaps are listed in the recipe. You can make this one day ahead - seal tightly with a layer of plastic wrap followed by a layer of foil and store in the refrigerator. Remove from the fridge about 90 minutes before serving. It should still be moist and delicious. 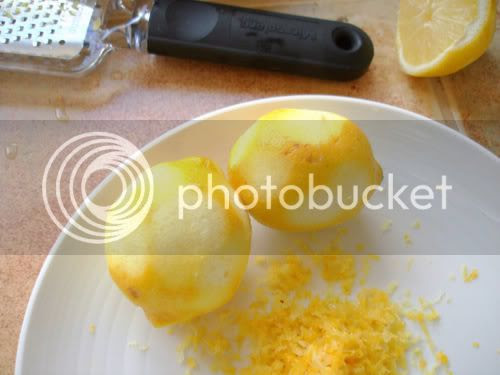 Naked lemons always make me feel sad.
On a side note, I won a Foodbuzz giveaway to Cochon 555 which is an event that has some famous Seattle chefs killing a whole pig and serving it to us. Oh, and there's also wine! I'm excited because I may be able to rediscover my Asian gastronomic roots by noshing on crunchy pig ears. Hurrah! 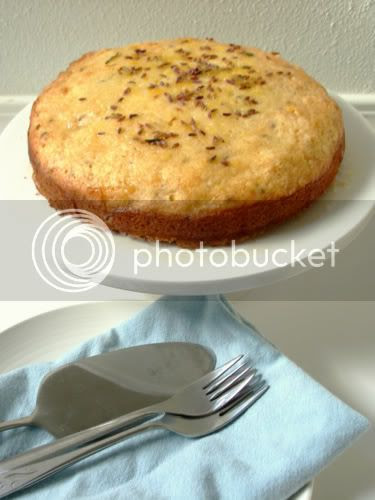 In a large bowl, mix together flour, baking powder, sugar and salt. In a smaller bowl, whisk together eggs, milk, oil, lemon zest and lavender flowers. Create a well in the large bowl and pour in the egg mixture. Stir gently until all ingredients are just combined. Pour into prepared baking pan.

Chuck into oven and bake at 350°F for about 40 minutes. Stab it with a small knife and if there are no soft crumbs sticking to the knife, it's done. Otherwise, check at every five minute intervals.

When the cake is done, remove from the oven. Let it cool in the pan and you can start on your glaze. Heat all the ingredients for the glaze in a saucepan until the sugar is dissolved and the glaze is slightly viscous.

Stab your cake all over with a chopstick or a skewer and pour the glaze all over it. Leave it to soak for about 5 minutes, remove from the pan and it's ready.
Posted by Amanda at 8:35 PM

just in case you don't see my reply to your comment, the no. 6 clog boots aren't at all slippery in the rain, and i find them comfortable enough to walk 6-7 hours.