The Sunday that was: Cochon 555

A couple of weeks ago, I managed to snag some coveted tickets to Cochon 555 as part of the Foodbuzz Foodie Correspondent Program. In case you've never heard of Cochon 555 (which I haven't either, up to this point), it is "a culinary event featuring five chefs, five pigs, and five wine makers in a friendly competition for a cause." And let me tell you first hand that five pigs can feed A LOT of people. 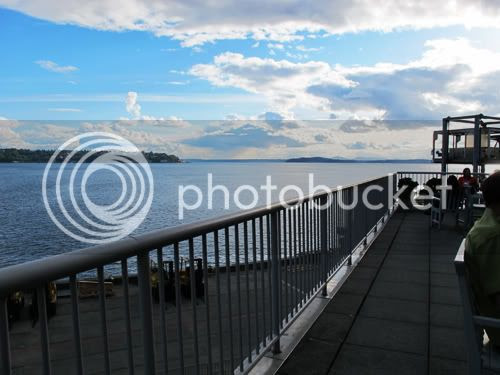 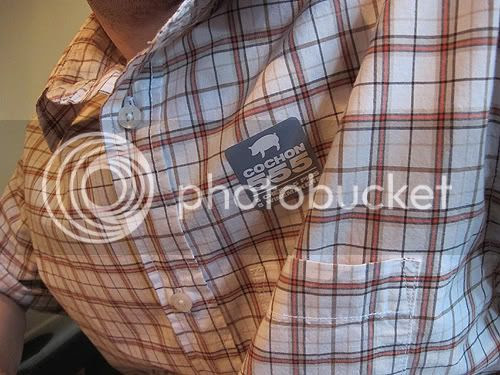 This year's Cochon 555 took place in the Bell Harbor Convention Center right down by the waterfront, which I think is venue that represents Seattle really well. Inside the dining hall, we were first greeted by a cheese selection from DeLaurenti and crackers from Macrina bakery. Ryan Farr of 4505 Meats down in Portland was on hand to demonstrate how to butcher a whole pig. That was by far the most interesting thing I saw at Cochon 555. There were also slideshows of cute berkshire and mangalitsa piggies projected on screen while slightly buzzed people noshed on pulled pork. I don't know if that was in good taste, but I am so glad Foodbuzz gave me the tickets because I had an incredible time; I drank and ate more than I should have (trusty Mr.Tums fixed the problem this morning) and talked to some very interesting winemakers and foodies. 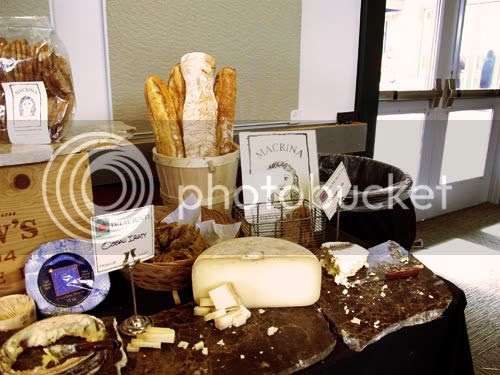 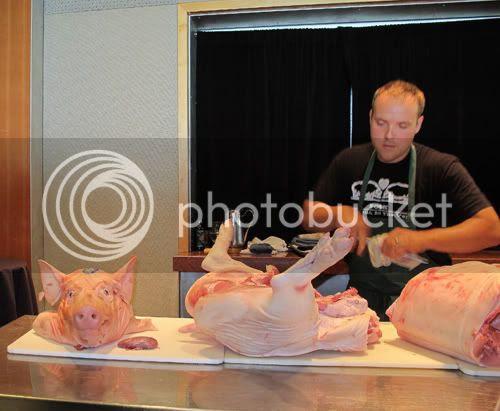 And the piggie said, "Bleu cheese!"

My favorite chef for the event was Tamara Murphy of the now defunct Brasa restaurant. For some reason, her restaurant was never really that amazing, but my goodness - the menu for Cochon was absolutely delicious. I thought her chorizo sliders were the cutest thing ever and tasted perfect topped with slivers of blue cheese, a bowl of chili verde on the side and complete with a glass of 2008 Pinot Noir from Elk Cove Vineyards. 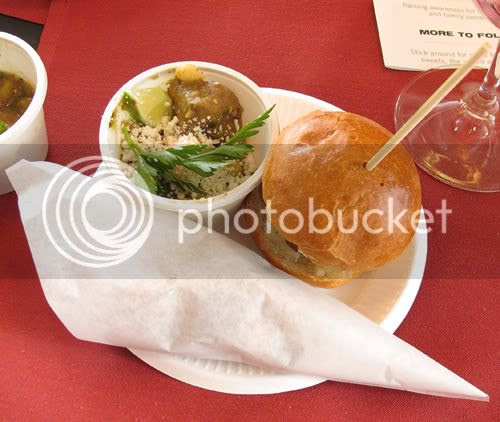 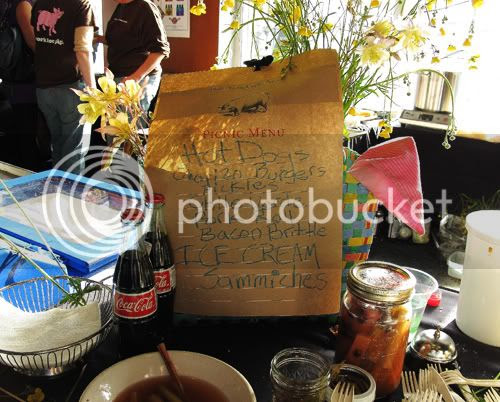 John Sundstrom of the almighty pretentious Lark ended up winning the event, and to prove my point of his almighty pretentiousness, his menu included tarte tatin with bacon caramel. Pretentious but delicious, I suppose. I couldn't get a picture of the tarte tatin close up because people were jostling and I swallowed mine in a split second lest some person kicked me in the shins and stole mine. I did however manage to grab a photo of John Sundstrom himself smiling knowingly, and a man in the background that looks strangely like Steven Spielberg (Do the Waldo thing)! 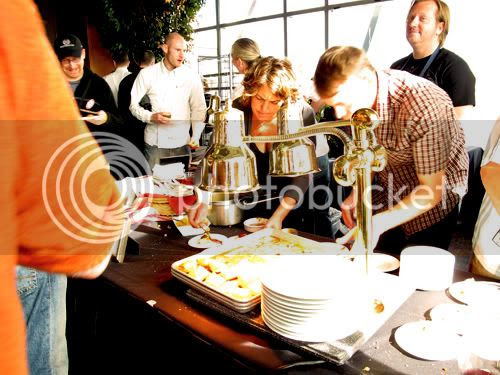 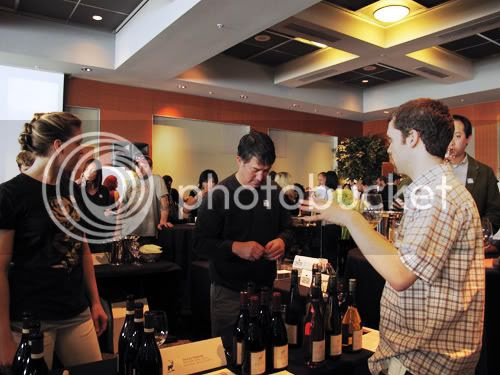 We managed to sneak in some nerdy chat time with some people from Elk Cove (3 kinds of Pinot!) in between lining up for the food samples. The gentleman very kindly suggested pairing the pate from Chester Gerl of Matt's in The Market with the estate Riesling. The other noteworthy small plates I liked were pork dumplings in dashi sauce from Adam Stevenson and a pulled pork dish with sparkling apple cider from Anthony Hubbard of Chow Foods. Also, the "head" chorizo by Mr. Gerl was quite amazing (On a side note, I went to Matt's once for my birthday and found it a little subpar, but I might have to try them again based on their perfomance at Cochon!). 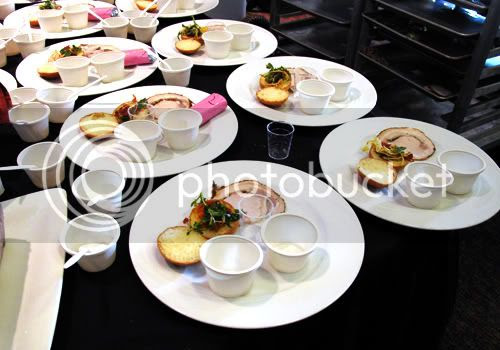 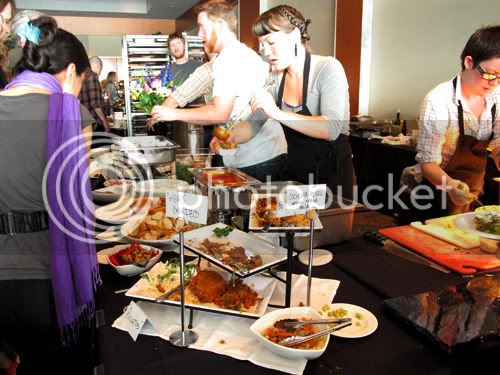 I think many of the food items conjured up by the Seattle "superchefs" were pretty interesting. Most were your standard high-end cafe fare while others were slightly more upscale. The only thing I did not care for were these really gross looking red velvet cupcakes with lard frosting. They tasted sort of like a cross between rancid Betty Crocker canned goop and Safeway cupcakes. 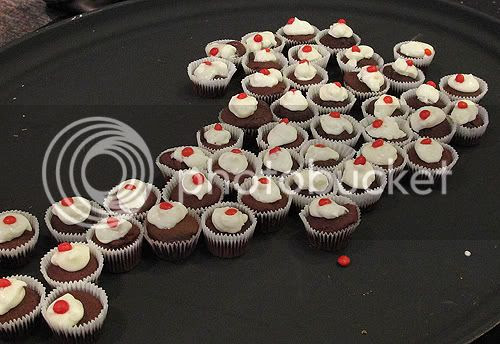 At the end of the day, I went home stuffed with pork goodness, and stumbling slightly from some really good wine. Thank you, Foodbuzz for the great opportunity and here's looking forward to next year's Cochon 555!
Posted by Amanda at 11:19 AM