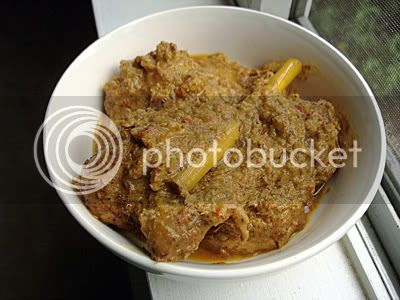 Chicken rendang is one of those dishes I grew up eating but never realized how bad it actually is for me. Rendang is basically and Indonesia or Malaysian style curried chicken simmered in coconut milk and dessicated coconut. I remember ladling spoonfuls after spoonfuls of it for my morning "nasi lemak" jaunt. When I first started cooking chicken rendang, then I realized that unless I wanted to die of a heart attack at 29, I had better cut it out of my diet immediately! I haven't eaten chicken rendang in over a year, and it just seemed an appropriately Malaysian dish to cook for my couples' date night (part of my surburban, growing old ritual). This recipe is something I've spend a long time perfecting, and which I promise you, will be one of the best rendang recipes you'll ever find. If you can't find screwpine (pandan) leaves in the fresh produce section of an Asian supermarket, try the frozen aisle. If you're in Seattle, Vietwah supermarket down in the ID has it frozen (It's call La Dua in Vietnamese), alongside some frozen banana leaves. I literally had to run to four different stores just to locate pandan leaves and kaffir lime leaves. So if you want to attempt this dish, make sure you have a decent Asian market close to you. You need tons of shallots and lemongrass to ensure that you have a thick gravy instead of a wussy, soupy one. 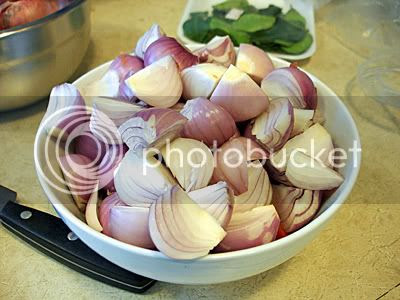 I also used fresh chillies instead of dry ones - I think dried chillies are much spicier and definitely not as tasty. Jalapenos or habaneros don't really work for this either - instead I used Korean chillies, also known as the Holland varietal which is milder, sweeter and the skin is much smoother and blends easier. If you can't find any Korean chillies, use 2 red Jalapenos and 8 dried chillies, soaked and deseeded.

In a frying pan over low heat, toast the shredded coconut until it becomes a dark golden hue. Set aside to cool. Cut the lemongrass into 3 inch pieces and give each piece a whack with a rolling pin to release the flavors.

Grind the chillies, shallots, ginger, turmeric and garlic in a food processor until fine, but do not puree.

In a large wok or dutch oven, heat the oil over high heat. Add in the grinded chilli mixture and fry for about 15 minutes until the mixture is golden and fragrant.

Add in the chicken and stir fry for an additional 10 minutes, until the chicken turns yellow from the turmeric and is coated through with the chili mixture.

Add in the coconut milk, lemongrass, kaffir lime leaves and pandan leaves. Bring the mixture to a boil, cover and simmer over low heat for about 45 minutes until the chicken is tender and cooked through.

Toss in the toasted, shredded coconut, and stir to mix thoroughly. Allow the rendang to simmer uncovered until the gravy is thick (about 15 minutes). Add in salt and sugar, stir and turn the heat off.

Remove the lemongrass, kaffir lime leaves and screwpine leaves and serve the chicken rendang with rice, bread or "nasi lemak"!
Posted by Amanda at 3:05 PM

Wow, definitely bookmarking this for a special occasion! In case pandan leaves are just utterly unfindable, can you suggest a substitution, or is it just pointless to make this recipe without them?

Kirby! The pandan leaves are not necessary for the rendang, but I used them for the rice. You can just serve the curry with regular jasmine rice and it's just as yummy!

I remember having chicken rendang at a local Malay restaurant. It was yum, and yours look delish! I had no idea that the curry was bad for the heart though, really?

Your recipe looks good. I will give it a try this weekend. I'm guessing you're from M'sia? Likewise and writing from Seattle. We are lucky to have plenty of ingredients available to make 'homesick' food.
-Audrey

This definitely made my mouth water.It's been so long since I last had this and Im glad I came across your recipe.If you won't mind I'd love to guide foodista readers to your site.Just add your choice of Foodista widget at the end of this blog post and it's good to go.Thanks!

We've made this a few times now, and it's a household favorite. Thank you for posting. I was wondering if it's possible to use all the same ingredients here but substitute beef? If so what kind of beef?

Anonymous: You can use beef short ribs (with the bone) or beef for stew. Either one would work fine.

Beef usually takes longer to cook, so instead of about an hour with the chicken, add extra water and let it simmer for about 2 hours. I would also add 1 cinnamon stick, a few star anise and cardamom pods (about 3 or 4 should do the trick).